Sport- and recreation-related concussion is a common injury that is now globally recognized as a major public health concern (1, 2). One reason is that between 10-25% of concussed athletes go on to develop prolonged symptoms (3, 4). Risk factor identification and the development of injury prevention strategies are therefore critical. While all athletes are at risk for sustaining concussion, the risk appears to be greater in pediatric and female athletes (5-8). Low neck strength is a potentially modifiable risk factor that may contribute to an elevated concussion risk in these populations. Since studies have shown that women have less neck strength than men and children have less strength than adults (9-13), these populations may be at a disadvantage with regard to controlling the head’s response during an impact because of less tensile stiffness to resist cervical movement. The overall body of literature addressing this relationship suggests that interventions aimed at increasing athlete’s neck girth, strength, and stiffness still hold promise as a means of reducing their risk of sport-related concussion. Therefore, the purpose of this study was to determine the influence of neck strength and muscle activation status on resultant head kinematics after impulsive loading, in athletes of both sexes, ranging in age from pediatric to adult. Three principal anatomic planes (sagittal, coronal and transverse) were studied. Primary outcome variables include change in peak linear velocity (ΔV) and angular velocity (Δω) of the head. Two hypotheses (H1 and H2) were tested:

The results of this study support the theory that greater neck strength and anticipatory muscle activation are associated with an attenuated kinematic response to impulsive force(s) acting on an athlete’s head across all planes of motion (p < 0.001).

The present study assessed head-neck stabilization in the sagittal, coronal and axial planes. This is significant because sport-associated head impacts in the real world occur in all planes of motion, and there is evidence to suggest that coronal plane lateral flexion may be more injurious than head motion primarily involving sagittal plane flexion and extension (14, 15). This study’s findings suggest that “bracing for impact” may be an effective strategy for decreasing the risk of concussion associated with sport collision by reducing the magnitude of post-impact head kinematics. Neck strength and impact anticipation are two potentially modifiable risk factors for concussion. Interventions aimed at increasing athletes’ neck strength and reducing unanticipated impacts may decrease the risk of concussion associated with sport participation. Furthermore, these results also suggest that “heads up” coaching and training strategies aimed at improving athlete’s sense of awareness of their surroundings and their anticipation of body collisions may be an effective means of improving player safety by facilitating cervical muscle activation to brace for impact.

Potential participants were excluded if they had a self- or parent-reported history of concussion, neck injury, migraine headache, or stinger/cervical radiculopathy, cervical musculoskeletal injury, cervical myelopathy, corrected vision less than 20/40, recent exposure to head lice and known or suspected pregnancy.

Each participant completed a brief set of warm up exercises consisting of 1 set of static neck stretches in each plane (flexion, extension, left and right lateral flexion and left and right rotation), one repetition each for 12 seconds, followed by one set of dynamic neck and shoulder circles lasting 12 seconds in each direction before data collection.

Instrumentation:
Neck circumference (girth) was measured at the level of the thyroid cartilage using a flexible metric tape. Head mass, which was used in estimating the location of the head’s center of mass, was measured with participants lying supine with their cervical musculature relaxed by suspending the head in a custom head support affixed to a cable with an in-line force transducer. Sonographic cross-sectional area of the right sternocleidomastoid (SCM) muscle at its midpoint was measured with participants sitting upright using an Ultrasonix RP Touch Research ultrasound machine.

Assessment of Maximum Isometric Neck Strength and Rate of Force Development:
Participants sat upright in a rigid-backed seat, with their shoulders and torso stabilized against the seatback by a strap, while wearing customized snugly fitting wrestling headgear attached to an adjustable cable with an in-line force transducer capable of being positioned for pulling against a fixed beam in flexion, extension, left lateral flexion or right axial rotation (see picture below). The participants were instructed to perform maximal isometric neck muscle contractions by gradually increasing the amount of force generated by their neck over 3 seconds until they were pulling with maximal effort in the specified direction. If activation of core or back musculature resulting in obvious torso movement was observed by the study team, the trial was discarded and repeated. The greatest of 3 peak force values in each plane was recorded as the maximum isometric neck strength value. Rate of force development was then assessed by instructing participants to perform similar neck muscle contractions “as rapidly as possible” in each of the specified directions without performance feedback. 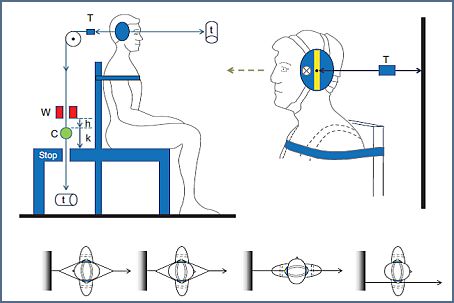 Method of External Force Application to the Head:
Participants were set-up using the adjustable cable with an in-line force transducer positioned for pulling against a fixed beam in flexion, extension, right lateral flexion and left axial rotation. A 1-kg weight located above the cable clamp was free to slide up and down the vertical portion of the cable, such that upon release, the weight free-fell until it contacted the landing pad (to limit maximum displacement of the participants head-neck segment to prevent injury), applying a force to the headgear proportional to the height from which the weight was dropped and proportional to the participant’s body mass. A second cable attached to the headgear ran horizontally in the opposite direction to a constant force spring to counterbalance the weight of the first cable. The procedure was repeated over three trials in each orientation under both muscle activation conditions, with at least a 30-second rest between trials.

Measurement of Head Kinematics:
Kinematics were measured using the Optotrak motion capture system that tracked markers attached to participants’ forehead, directly above the left or right eye, depending on the direction of impulsive loading and the associated orientation of the kinematic camera. To account for differential impulsive load magnitudes between participants, all kinematic outcome variables were normalized by dividing by the energy associated with the impulse. Average, normalized kinematic head response values were then calculated for each parameter in each orientation under both muscle activation conditions for every participant. The normalized peak linear and angular velocities of the head are referred to as ΔV and Δω, respectively.

Statistical Analysis:
To test H1 and H2, multivariate mixed models were used across all directions of head motion, with adjustment for age and sex. For the primary analysis, maximum isometric neck strength in the opposing direction and cervical muscle activation status were considered primary predictor variables, while ΔV and Δω were considered the primary kinematic outcome variables. Participants were dichotomized into two age groups (high school or younger athletes and collegiate or older athletes). Pearson product-moment correlation coefficients were calculated to describe the relationships between neck strength and ΔV and Δω in each direction, under each cervical muscle activation state (baseline versus anticipatory). Secondary analyses assessed the relationships between neck circumference and ΔV and Δω in each direction as well as between SCM cross-sectional area ΔV and Δω in sagittal extension.