The Role of Neural Tension in Hamstring Flexibility

Human skeletal muscle resistance to passive stretch has long been attributed to the extensibility of the non-contractile connective tissue components of musculotendinous units, the stretch-induced contractile response in myofibrils, or the resting tension in myofibrils. Research simultaneously investigating range of motion (ROM), stretch resistance, and electromyographic (EMG) responses has shown that resistance to stretch is primarily due to the viscoelasticity of the non-contractile components.

However, no research to date has investigated the possible role of neural tissue extensibility (or lack thereof) in skeletal muscle resistance to passive stretch. The slump test (see below) is commonly used to assess for the presence of adverse neural tension in people with low-back and hamstring injuries, with a positive test defined as one where the symptoms are present in the slump position (cervical and thoracic flexion) and alleviated with cervical extension. The pain elicited by a positive test is thought to be due to excessive nerve stretch (intraneural) or reduced mobility due to adhesions between neural and surrounding tissues, preventing neural tissue from gliding freely (extraneural). The evidence of neural tissue tension in a positive test is based on the clinical signs (pain) rather than any direct evidence of increased neural tissue tension. 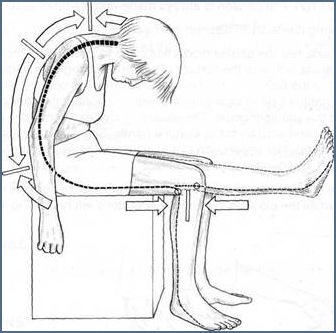 Previous research (7) demonstrated no additional lengthening of the hamstring muscle group and no EMG response in a slump test, and therefore attributed a positive test to increased neural tension. The purpose of this study was to determine whether neural tension would affect passive resistance to hamstring stretch in both neural and neutral stretch positions, as measured by maximum ROM, stretch discomfort, stretch resistance, and the EMG response to the stretch.

The study results found that adding neural tension during a hamstring stretch (slump stretch position) increased the stretch resistance compared to a neutral stretch position, but that the increased resistance was not due to a change in response of contractile tissue. This is evidenced by insignificant EMG activity during the stretches, which is consistent with previous findings testing the stretch response with and without additional neural tension (1-3). However, previous research has shown some resistance to passive stretch can be attributed to muscle fiber extensibility and the stiffness of surrounding fascial components(4), and a small contractile response at end ROM may have some effect on the stretch resistance.

Whilst the addition of neural tension significantly increases passive resistance to stretch, it remains unclear whether that effect is due to intraneural factors (neural tissue resistance to excessive stretch) or extraneural factors (decreased neural tissue mobility due to scarring or adhesions in the surrounding soft tissue). Numerous studies have demonstrated acute losses of maximal voluntary strength following passive stretching, which has been attributed to neural inhibition. The increased neural tension derived from passive stretching may be the mechanism for stretch-induced strength losses; depressed nerve conduction velocity has been found up to 30 minutes after sustained peripheral nerve stretch in animal models.

Additionally, it is unclear in this study whether increased neural tension has a negative effect on injury risks. Positive slump tests, indicating adverse neural tension, have been documented in athletes who have sustained recurring hamstring strains, however this same study found no difference in flexibility between injured players and controls, and did not examine the impact of neural tension on tested flexibility measures (5). However, this does not rule out an increased effect of neural tension on stretch resistance in previously injured athletes, which may in turn contribute to the high recurrence rate of hamstring strains.

Resistance to stretch, knee flexion ROM, hamstring EMG activity, and stretch discomfort were measured during passive hamstring stretches in eight subjects aged 39 (SD = 13) years old (6 men and 2 women). Stretches were completed on both right and left legs. Subjects had no significant history of low-back or hamstring injury and were active (reported being able to run 1 mile in < 10 minutes).

Stretches were performed using an isokinetic dynamometer (5°/ sec), with the subjects seated with the test thigh flexed 40° above horizontal, and the seat back at 90° to the horizontal. Knees were passively extended to subject-determined maximum stretch tolerance with test order (neutral vs. neural) alternated between legs. For neural stretches, the cervical and thoracic spine were manually flexed.

Surface EMG signals were recorded from the medial (semitendinosus) and lateral (biceps femoris) hamstrings during the stretches. For normalization, two MVCs were performed at the stretch starting position (90° knee flexion) before the first stretch. A one-second average covering the visual peak EMG amplitude was recorded for the two MVCs and then averaged across contractions and muscles. The one-second average EMG amplitude at maximum ROM for each stretch was averaged across muscles.

Knee flexion angle for each leg and stretch was expressed as a percentage of the lowest maximum ROM achieved across any of the stretches (right vs. left side, neutral vs. neural positions); maximum ROM for the stretch with the higher ROM was given a value of >100% depending on the relative differences between the stretches. Resistance to stretch at 10% increments in ROM was recorded for each stretch.

Normalized resistance to stretch in the 10% increments was compared between the neural and neutral stretch with an 11 x 2 repeated measures ANOVA. Bonferroni corrections were used for planned pairwise comparisons (11 comparisons between neural and neutral stretches from 0-100% maximum ROM, P < 0.05/11 = P < 0.0045). Based on the reliability of previously published measures of passive resistance to hamstring stretch (6) it was estimated that, with this subject group, a difference of 12% in passive resistance could be detected between stretching techniques at P < 0.05 with 80% power.