For decades, there has been a large interest in the relationship between hip and spine function. Investigation into this relationship has lead many authors to suggest an association between low back pain and a functional gluteal muscle inhibition (1, 2).

Many studies have gone on to prove that lumbopelvic muscle imbalances are a potential predictor of low back pain, and that progressive rehabilitation focusing on core stability and gluteal strengthening is beneficial in sub-groups of individuals with low back pain (3). The goal of any rehabilitation program is to tailor the progression of exercises according to the patient’s capabilities, from low-to-high activation levels, in order to make the patient better symptomatically, and depending on the practitioner’s philosophy, functionally.

The authors of this study sought to understand the influence of resistance band placement on muscle activation profiles during two common exercises. Specifically, they wanted to describe changes in activation according to the placement of a mini-band around the knees, ankles and feet during two rehabilitation exercises called ‘Monster Walks’ and ‘Sumo Walks.’ Additionally, the authors wanted to determine if a more distal band placement can increase hip abductor (glutes, TFL) activation and whether or not clinicians can preferentially activate the gluteal muscles (Gmed and Gmax) by placing the band around the foot due to the creation of an internal rotation moment about the hip.

Placing the mini-band around the forefoot creates additional activation and thus potential clinical ‘value’ for gluteal activation, due to the fact that it creates an internal rotation moment that must be overcome by the glutes. When the glutes counteract the internal rotation moment about the hip with a relative (and often isometric) external rotation, they are activated tremendously. Additionally there was not significant increase in TFL activity with forefoot band placement in comparison to ankle band placement, indicating that it is possible to preferentially activate the gluteal muscles.

Both the Sumo Walk and the Monster Walk should be integrated into the rehabilitation exercise repertoire of clinicians, especially with individuals who suffer from sensitivity and/or pain in specific lumbar spine postures (i.e. flexion or shear intolerance). Essentially, what the authors were trying to say with the results of the secondary analysis is that these two exercises are spine safe. The authors also suggest that these exercises be combined with proprioceptive sandals (Janda Shoes – 4), clamshell and core exercises to emphasize hip strength through a fixed and stable spine.

Nine healthy male volunteers were recruited from a university community. The participants were instructed to perform two exercises that were up-right modifications of walking gait, while in a semi-squat: ‘The Monster Walk’ in the saggital plane and ‘The Sumo Walk’ in the frontal plane (see photo below). While performing the Monster Walk, the participants were instructed to walk while maintaining a hip width stance, while at the same time, having to overcome a medial resistance of an elastic band. During The Sumo Walk, the participants were asked to start in the same stance as The Monster Walk, but to also simply ‘side-step’ in the frontal plane. Each subject was instructed to maintain an abdominal brace and a neutral spinal posture, and to move in a slow and controlled fashion. 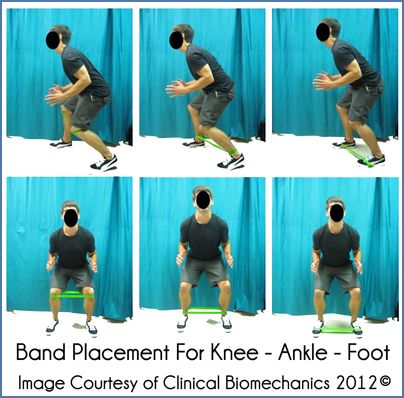