Unilateral ankle immobilization alters the kinematics and kinetics of lifting

The human body can be thought of as a ‘kinetic chain’, implying that motion and dynamics of the human movement system are intimately coupled. If we accept this construct, we could then logically infer that local movement constraints (such as immobilization) can alter the kinetics and kinematics of (potentially) all bodily segments, particularly during closed kinetic chain activities such as lifting.

Injury to a joint, with subsequent immobilization, has the potential to create long-lasting functional deficits. For instance, an ankle fracture with subsequent casting can result in loss of ankle joint range of motion that can persist long after acute treatment (1-3). This can force the affected individual to compensate by adapting their whole-body movements.

It is possible that distal lower extremity joint hypomobility can increase the potential for injury to the low back while lifting. The goal of this study was to understand the effect unilateral immobilization of the ankle joint has on low back loading while lifting. The authors hypothesized that peak low-back loading during lifting would be influenced by unilateral ankle immobilization, as subjects would be obliged to adapt their movement strategies to compensate for the loss of ankle joint motion.

The impact of ankle immobility was equivocal under both the 3.7 and 12.7 kg lifting tasks. Compensatory movement strategies were varied based on the lift origin and destination. This being said, a number of common kinematics responses were observed when comparing the no-brace vs. brace conditions:
The authors also discussed a recurrent scenario whereby some individuals responded uniquely to the braced condition. In 14/180 cases, lifting from floor level and to the right (position 3), whilst in the braced condition, resulted in greater right knee sagittal plane motion (strategy 2). When this occurred, more right ‘heel lift’ was observed. The heel-lift strategy resulted in greater L4-5 compression and less L4-L5 A-P shear. L4-L5 medial-lateral shear was equivocal between the 2 strategies.

In this study, an increase in peak L4-L5 anterior-posterior (A-P) reaction shear (especially in Strategy 1: lumbopelvic compensation) and bone-on-bone compression (especially in Strategy 2: heel lift compensation) were shown when the right ankle was immobilized. This is meaningful if applied repeatedly (4) and/or if the lumbar spine is deviated from its neutral lordotic position (5-7). This supports the notion that workplace injury prevention strategies could be enhanced if the kinetic chain concept is considered.

It was demonstrated that lower extremity joint dysfunction, in this case, unilateral ankle immobilization, could alter low back injury potential while lifting at work. Therefore, it is appropriate, and most certainly important, to interpret the body as a unified kinetic chain. This consideration might yield important information that might not be apparent during more targeted investigations. This is also important in cases where modification of work tasks is not possible or practical (i.e. firefighting).

All subjects completed occupational lifting tasks from three different origins to 3 different destinations (for a total of 18 permutations), both with and without their right ankle immobilized. A 3.7 and 12.7kg mass were lifted a standardized distance of 0.8m. Three repetitions of each permutation were performed, totalling 108 lifts (54 lifts with immobilization, 54 without). Order of task performance was randomized. 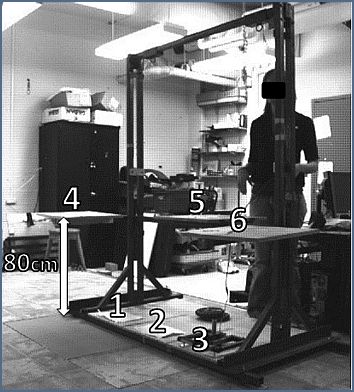 Right ankle immobilization was achieved through the use of a custom brace, fitted into each subject’s athletic shoe. It was designed to restrict sagittal, frontal and transverse motion during lifting, in a closed kinetic chain. 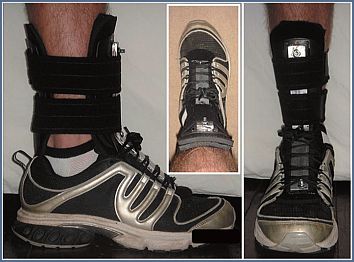 Statistically, within-subject comparisons were performed to examine the effects of the no-brace/brace and light-load/heavy-load conditions, and the interaction of condition and load on lifting kinematics and kinetics.