Many athletes are injured at some point in their careers (1). Soccer players are no stranger to this fact. In fact, injury to the hamstring muscle group is the most common injury in soccer, with an incidence of 0.5 – 1.5 injuries per 1000 hours of soccer competition and training (2). This type of injury unfortunately has a high recurrence rate. As such, one of the largest research trends in the sports realm is the prevention of these injuries by increasing the eccentric strength of the hamstring muscles (as eccentric loads are often the mechanism of injury). Put simply, this can be accomplished by lengthening the hamstring muscle complex while it is loaded and contracted (3).

With this in mind, these researchers endeavored to design a cluster-randomized controlled trial, using a 10-week eccentric training exercise program (Nordic exercise – explained below) in an effort to reduce the incidence of new and recurrent acute hamstring injuries. They also attempted to reduce the severity of hamstring injuries when they occur.

This study is the first to utilized cluster-randomization in their research methodology. It is also the first to document the possibility of significantly reducing the incidence of hamstring injuries in soccer athletes by integrating eccentric hamstring muscle training. Eccentric training has the potential to decrease the rate of new injuries by approximately 60% and can reduce the rate of recurrence by approximately 85%. However, there is no apparent effect on decreasing the severity of hamstring injuries when they do occur. Further research is needed on athletes in other sports, but for now the exercise utilized in this study (see Study Methods below) is a simple one to implement with your athletic patients as a component of their training programs.

What is the Nordic Exercise?

This is a partner exercise, where the one athlete begins in the kneeling position, while the training partner applies a manual counter weight to the kneeling athlete’s heels/lower legs to ensure that the feet stay in contact with the ground. The kneeling athlete then attempts to slowly lower their torso toward the ground to maximize hamstring loading eccentrically. The athletes performing the exercise were asked to touch their chest to the floor, while allowing their arms/hands to buffer the fall. Subsequently, the athlete was asked to return back to the starting position by using their hands to minimize loading in the concentric phase. Each athlete assigned to the intervention group performed 27 sessions of the Nordic Exercise over the course of 10 weeks. 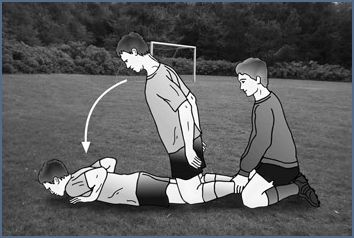 What is the intervention group’s training protocol?

Randomization of treatment groups was done in a cluster-like fashion, whereby individual teams were assigned into a treatment group (those teams who collectively performed the Nordic Exercise) and the control group (those teams who did not perform the Nordic Exercise). All 3 professional divisions in the Dutch soccer league were used as a pool of subjects. The study did not incorporate blinding into its methodology. All players, coaches and investigators were aware of group allocation. The study took place over the course of 10-weeks. The injury registration period started during the midseason break of the 2007-2008 season, and continued until the end of the first half of the 2008-2009 – a full 12 month season. To enhance compliance of injury registration, a free ultrasound investigation was offered to each player who reported an injury. However, this procedure was not used to verify the clinical diagnosis, because not all hamstring injuries can be detected using this imaging modality.